This site is translated into English automatically from original page in Polish
EN PL
by Bartosz Stuła
on 05.03.2021

Many Marvel and DC characters have celebrated their anniversaries in recent years, but one of them deserves a moment of attention. He is a sprinter, or rather sprinters, responsible for keeping this Multiverse in check.

The original character known as “The Flash” was Jay Garrick (actually Jason Peter Garrick, as his real name sounded), introduced in the so-called “Golden Age” of comics in January 1940. It was created by Gardner Fox and Harry Lampert, and you can follow his adventures in Flash Comics, published by All-American Publications. His earliest Keystone City adventures took place on Earth-2, although he was not really introduced to the multiverse during the Infinite Earth Crisis. Garrick’s career inspired his successor, Barry Allen, to become the second Flash. They have collaborated on numerous occasions as well as with Kid Flash and other speedsters. As one of the oldest surviving superheroes, The Flash continues to fight evil and act as a mentor to the younger generation. Joan Williams is his longtime wife with whom he lives to this day.

Like many other superheroes of his time, he too joined a larger organization, the Justice Society of America. Its popularity grew over time, and Flash Jay Garrick received another series in 1941, titled All-Flash. In 1951, there was a breakdown and the JSA adventure series of which Jay was a member, All-Star Comics , was canceled in 1951, and Garrick himself would not reappear for another ten years. During this time, All-American Publications became DC Comics. 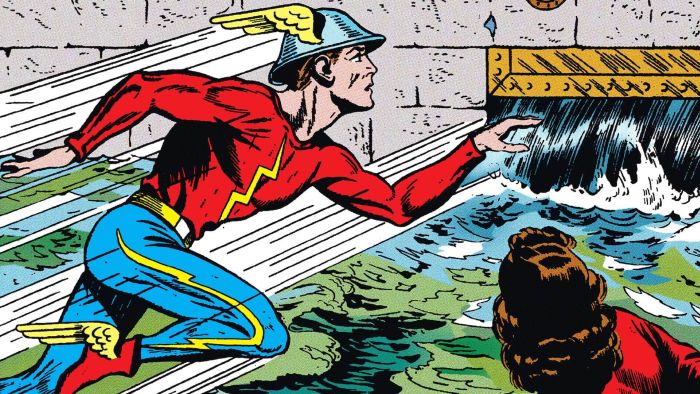 The most popular sprinter

DC Comics decided to restart the Flash series in 1956, creating a new character named Barry Allen. Barry Allen was created by writer Robert Kanigher and artist Carmine Infantino, making his debut in the Showcase comic book series . Many consider this to be the beginning of the “Silver Age” of comics, launched by the renaissance of classic superheroes. Despite the shared name and power, Allen was a completely new character with a new costume, with no relationship to Jay Garrick, not resembling a soldier with a World War I helmet. Barry Allen climbed to the heights of popularity after four appearances on Showcase and received his own series The Flashin 1959. This new series, written by John Broome, continued the numbering from the moment Flash Comics was canceled. Flash’s young midfielder Kid Flash soon followed. His true identity was Wally West, the nephew of Barry’s love, Iris West, who gained powers in the same way as his mentor and Jay Garrick – through an accident involving the power of momentum.

The following 1960, Jay Garrick’s creator Gardner Fox included Barry Allen in the cast of his new superhero team, Justice League of America, alongside other top DC characters at the time. The following year, the two Flashes met in the groundbreaking crossover The Flash of Two Worlds , which was the beginning of the multiverse. 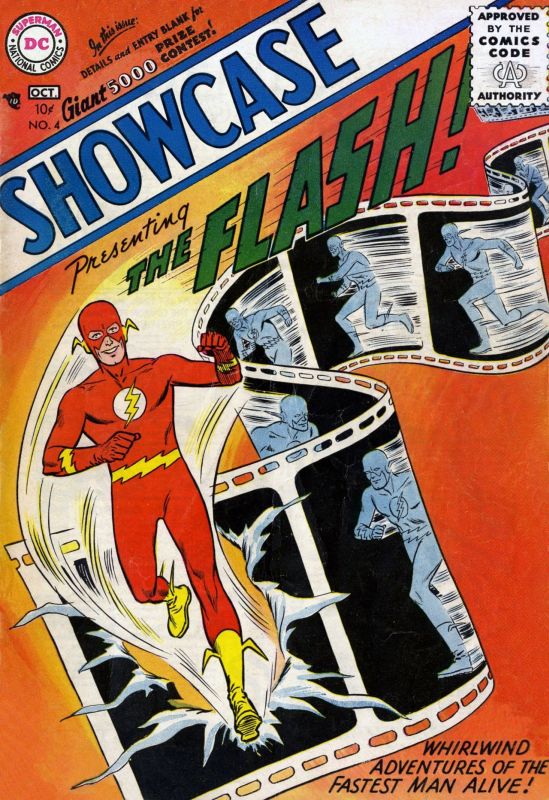 Another important milestone on the way of the Flashes was the great crisis of the multiverse. Barry Allen died heroically the same year in the event Crisis in the Infinite Lands, written by Marv Wolfman, where he sacrificed himself to save the universe from the Anti-Monitor. At the end of the event, Wally West took over as his mentor, becoming the new Flash.

The following year, 1987, Wally West became the lead character in the Flash series, written by Mike Baron and restarted at “1”. Another writer, Mark Waid, began researching Wally West’s origins in 1992. It was Waid who introduced the most important concept of Speed ​​Force – the Power of Momentum, from which the Flash draws its powers. At the Zero Hour comic event, he also introduced Impulse as Wally’s new sidekick, whose real name was Bart Allen and was Barry Allen’s grandson raised in the 30th century. Over time, Bart, along with older members of his family, joined the ranks of the larger organization Young Justice.

Then Geoff Johns went down in the annals of Flash history. He transformed Impulse into the new Kid Flash in 2003’s Young Titans. His work on the world of Flash ended with the Rogue War story , which told about the war between the greatest villains in Keystone City and the return “from beyond the grave” or “from the past” of Barry. 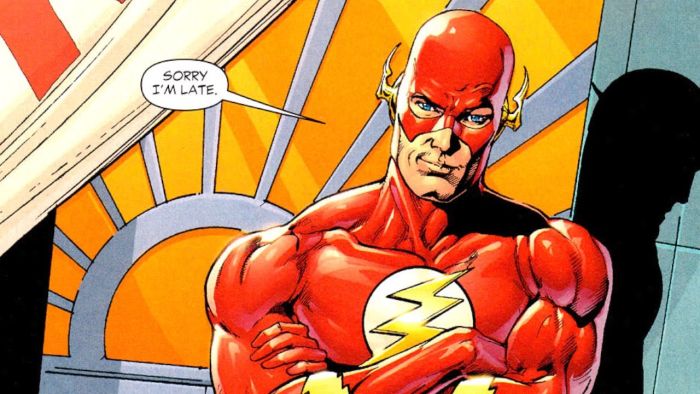 Flashpoint – Flash proves to be the key to the Multiverse

In another crossover, titled Infinite Crisis, in 2006, Wally West disappeared into an alternate reality battling Superboy-Prime along with his family. This time it is Bart Allen who takes the challenge to become the next Flash. In the new series The Flash: The Fastest Man Alive , which ran for just 13 issues, Bart Allen dies heroically at the hands of the arch-nemesis Inertia.

At the same time, Wally West and his family return for the Lightning Saga crossover , written by Brad Meltzer and Geoff Johns. The events of another 2008 Grant Morrison crossover, Final Crisisbrought Barry Allen back to life as part of the ordinary DC Universe. Barry received a brand new origin story explaining that Professor Zoom changed history by going back in time and murdering Barry’s mother when he was still a child. At the end of the series, Barry was officially confirmed as The Flash, and Wally West also acted under that name in a new, distinctly different costume. In 2011, however, Geoff Johns led to something no one expected – Flashpoint. The event introduced an alternate timeline for the entire multiverse in which no one remembered Barry Allen being the Flash, thereby demonstrating that speedsters wield extraordinary power and that they “control” time and reality through their connection to the power of momentum. Eventually it was made clear that Barry caused this event by going back in time, to try to save my mother from Professor Zoom. The proposal led to a complete reset of the timeline, resulting in a completely new version of the DC world.

This reboot was dubbed The New 52 , every series so far published by DC has been canceled and new books have been re-released as Number 1. Barry’s life had become very complicated for a while. Barry grew younger, his marriage to Iris West was canceled on the temporal line, and Patty Spivot appeared on the love horizon. Kid Flash / Bart Allen has been re-introduced as a new character from the future named Bar Torr with no connection to the Allen family. His performances were featured in the Teen Titans comic by Scott Lobdell. Older Jay Garrick has been removed from Flash history and a new, younger version of Jay Garrick has been introduced in the Earth 2 seriesfrom 2012 written by James Robinson. Wally West was controversially removed from DC’s continuity until he reappeared in 2014.

However, the DC owners decided to go back to the original numbering once again and during the DC Rebirth event they restored the original Wally West before the New 52 restart, who was lost in Speed ​​Force with all his memories from the original timeline, proving that he is the fastest speedster in the history of the multiverse . There is also a new Wally West being African American. 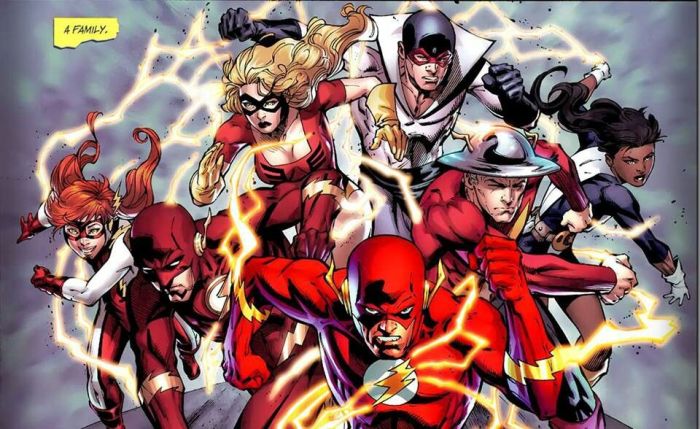 As you can see, the story of Flash is slightly complicated and full of plot twists and returns. Because Flash is not only a hero, it is a symbol of steadfastness and responsibility for many important matters. I wholeheartedly encourage you to familiarize yourself with the history of this interesting superhero, especially since he appears more and more often on both small and large screens, and in the future he may play an even greater role than we think!

My tiger queen - review of the comic book "Isola", vol. 1

How to communicate with a fan? - review of the comic book "Investigations of Enoli Holmes. The riddle of the fan ", vol. 4

29.04.2021
« Previous article
When the psyche does not hold up - "Batman: The Last Knight on Earth" review Next article »
End of the series - review of the book "Wędrowiec cienia"
Fun facts