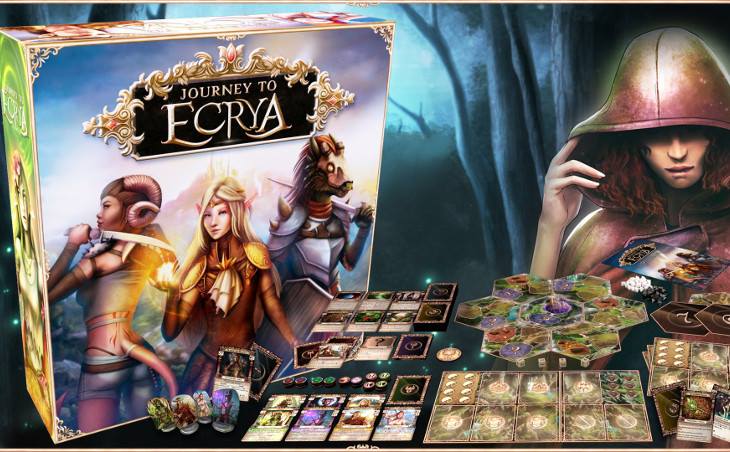 There are only three days left to the end of the collection for  Journey to Ecrya, an  adventure-fiction board game set in a dangerous, yet surprising fantasy world. Don't hesitate and support the project on Kickstarter!

Journey to the ancient city of Ecrya atop the Cursed Mountain, where terrifying monsters and groups of outcasts you would not want to meet await you. On your way through a land ravaged by magic, you will encounter dangerous beasts, ancient ruins just waiting to be explored, and equipment to help your heroes survive. Use provisions, create spells and equip characters with weapons, armor and other useful items that will help you achieve your goal: conquering the cursed mountain.

Journey to Ecrya  is a turn-based game for 2-4 people, so the role of the game master is passed from player to player each turn. In this way, they can create their adventure together and none of them is forced to work harder than the others. Everyone also chooses one of the eight available heroes to help in winning the competition: reaching the top of the Cursed Mountain first, where a formidable opponent lurks.

All eight have their own reasons to embark on this dangerous journey and make it more difficult for the rest of the adventurers. They are also distinguished by strengths and weaknesses, which will often have an impact on the course of history.

But beyond the heroes,  Journey to Ecrya  has so much more to offer:

So if you would like to support the project, you still have a chance: check out the project’s Kickstarter . And if you’re still missing the details of  Journey to Ecrya , don’t hesitate to check out the official website of the game . You can even test the game demo in electronic version! Unfortunately, only the English language version is foreseen for now.

Rapunzel with a beard, a female Beast and a boy in a red cap - review of the book "Princess in shining armor"

Fairy… realism? - review of the series "Destiny: The Winx Saga"

26.04.2021
« Previous article
Shazam in a new costume on the set shots Next article »
Marvel Comics announces a new comic series dedicated to the Hulk!
For beer