Good news for everyone who is irritated in the cinema by loud comments and crunching popcorn - the Abbott family returns to the big screens, and with them murderous mutants with extremely sensitive hearing. Are you rustling with a bag of chips? This time you are threatened with something more than just the angry glances of your companions ...

Nothing heralded a tragedy …

One day, in a small town, life went on without any major worries. Lee Abbott (John Krasinski) stopped as usual at the local convenience store and shopped, late for his son Marcus (Noah Jupe) game. In a hurry, he packed the fruit into the net and dashed towards the pitch, one ear registering the sensational reports of a tragedy that took place in distant China. What he does not know is that a year and a half later, his wife, Evelyn (Emily Blunt) and the children will have to cope without him – in a world where bloodthirsty creatures will prove to be just one of many problems. Not the greatest at all.

For quite a long time, I wondered if the creation of the next parts of the Silent Place had any sense other than purely commercial motives (the film earned over $ 300 million worldwide, repeatedly returning a modest – for Hollywood production – budget). John Krasinski gave the world a coherent and artistically fulfilled film, creatively playing an original, but in fact very simple concept – absolute silence as a condition for survival. However, the density of the action combined with a rather laconic world-creation made the whole thing seem a fresh, but one-time attraction, and each subsequent approach to this story will be doomed to some kind of duplicity. Well, it has to be said straightforwardly: in part it is just like that. In a Quiet Place 2Krasinski does not try at all for revolutionary solutions and fictional tippers; instead, he chose to keep the conceptual core of the previous installment while outlining the fate of other survivors. Don’t stray from the path

The fact that Krasinski does not differ much from the proven formula does not mean that he adheres to it in an orthodox manner – on the contrary. Aware that both the viewers and the characters themselves have already met the monsters terrorizing humanity and found ways to deal with them, the creators focused on the social consequences of the extermination of humanity. The pretext for this is, of course, the direct consequences of the events at Cichy Miejsce. The family farm is still burning when the Abbotts leave the tame, previously safe piece of land and set off into the unknown. The first stop will be an abandoned factory, where they will be sheltered, albeit reluctantly, by their pre-world friend Emmett (Cillian Murphy). And it is largely thanks to him and the Abbotts’ hearing impaired daughter, Regan (the faultless Millicent Simmonds), that viewers will see what the world looks like now, outside the bunker hidden under a few meters of concrete cover.

The main location of the film made it possible for the scriptwriters (as in the case of the first part, Krasinski co-wrote the script with Scott Beck and Bryan Woods) a fairly liberal approach to the iron rule that the characters had to follow so far. There is less in the Quiet Place 2moments of complete silence. This, of course, still dominates, the solid isolation of the place of action allowed, however, to smuggle in more dialogues, exposing the specificity of the world presented. Most of the information and reactions are still conveyed without words. It is the youth that shines above all – Millicent Simmonds and Noah Jupe; the cocktail of conflicting emotions on their faces – regret, determination, fear, hope – is impressive. Cillian Murphy also duly replaces John Krasinski, who appears this time only in the retrospective opening sequence of the film. 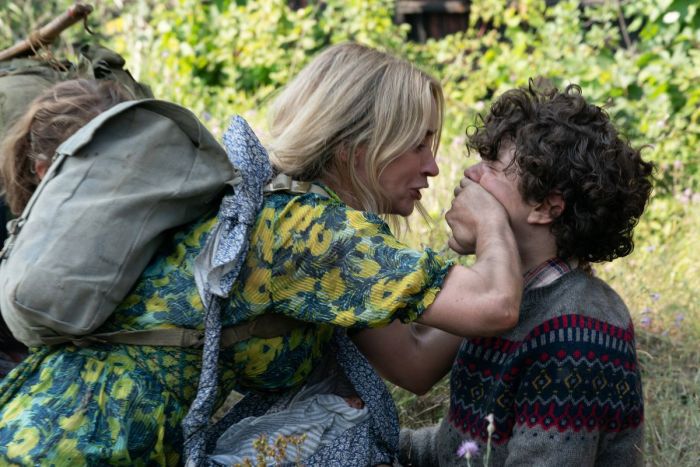 Precision from the ruler

Apart from the first minutes, introducing viewers to the world just before the appearance of bloodthirsty mutants, the action takes place linearly and chronologically. The unity of time has been preserved – the adventures of the separated characters take place in real time, as recalled by precise, parallel editing. The tension is intensified by long (or stylized as such), hellishly stressful shots following the heroes in emergency situations. This means that – as it was in the first part of the film – what is happening “here and now” is most important, and the action flows rapidly, without unnecessary downtime. Particularly noteworthy are sound editing and musical setting. In a work where silence plays a dominant role at the level of the concept itself, small murmurs, hisses and knocks are perfect punctuation, making the recipient aware of how many sounds seem involuntarily and unconsciously. At times the entire room held her breath – even the one guy next to him, who stubbornly rustled some paper bag for the first half an hour.

An equally positive impression is made by a carefully written, thought-out script. The authors made sure that the details and small props were properly motivated so that all the shotguns hung in the earlier files would sooner or later fire and affect the action. Even seemingly irrational actions and decisions can be defended. The son of the Abbotts, Marcus, in particular, seems to be a magnet for metaphorical balls and quite real poor judgments, which also seems psychologically plausible. It is hard to expect heroism and cold calculation from a frightened kid. Mr. Krasinski, you’ve got away with it again

We invite you to see the film Silent Place 2 in the Cinema City network!

A successful sequel to a successful horror film. However, it is difficult for me to imagine the next part of the series - already announced by the studio.

"Like a Dickens novel, but with gibs." - review of the book "Later"

"Gothic: Awakening" - what is known about the emerging film?

The new cast of "Stranger Things" has been introduced

09.06.2021
« Previous article
The alleged release date of "Star Wars Jedi: Fallen Order" on PS5 has been leaked Next article »
The new cast of "Stranger Things" has been introduced
For beer