This site is translated into English automatically from original page in Polish
EN PL
by Katarzyna Gnacikowska
on 08.01.2021

The papers show that a Master of Science (MSc) from the Lodz University of Technology, however, they cannot find a job. A free spirit looking for his place on earth, a big fan of all kinds of series, especially Supernatural, Teen Wolf, American Horror Story, but there is nothing to limit yourself to. A book-alcoholic (not for customs and history!) Of the first water, which will probably die overwhelmed by his "small" crops. Seemingly busy, but she hasn't gotten her precious yet. He likes to laugh, read and have a good time. He dislikes rudeness, hypocrisy and hopeless people. A good friend of Deadpool and Doctor Strange.

Game producers are outdoing each other in new ideas, just to intrigue users and give them something innovative that will tempt them to buy. The bar is raised when trying to tempt fans of board games and books at the same time. You might think that the topics are difficult to connect with each other. Nothing could be more wrong! There is a way for that as well, and I don't mean paragraph games.

The Rebel is going crazy and has released another interesting item, which this time is aimed at the little ones, but you can also play with the whole family, which creates stronger bonds. The stories , because this is the title I mean, were created by Marie Fort and Wilfred Fort, and the graphics are the responsibility of Yevgeny Smolenseva and Irina Peczekina. 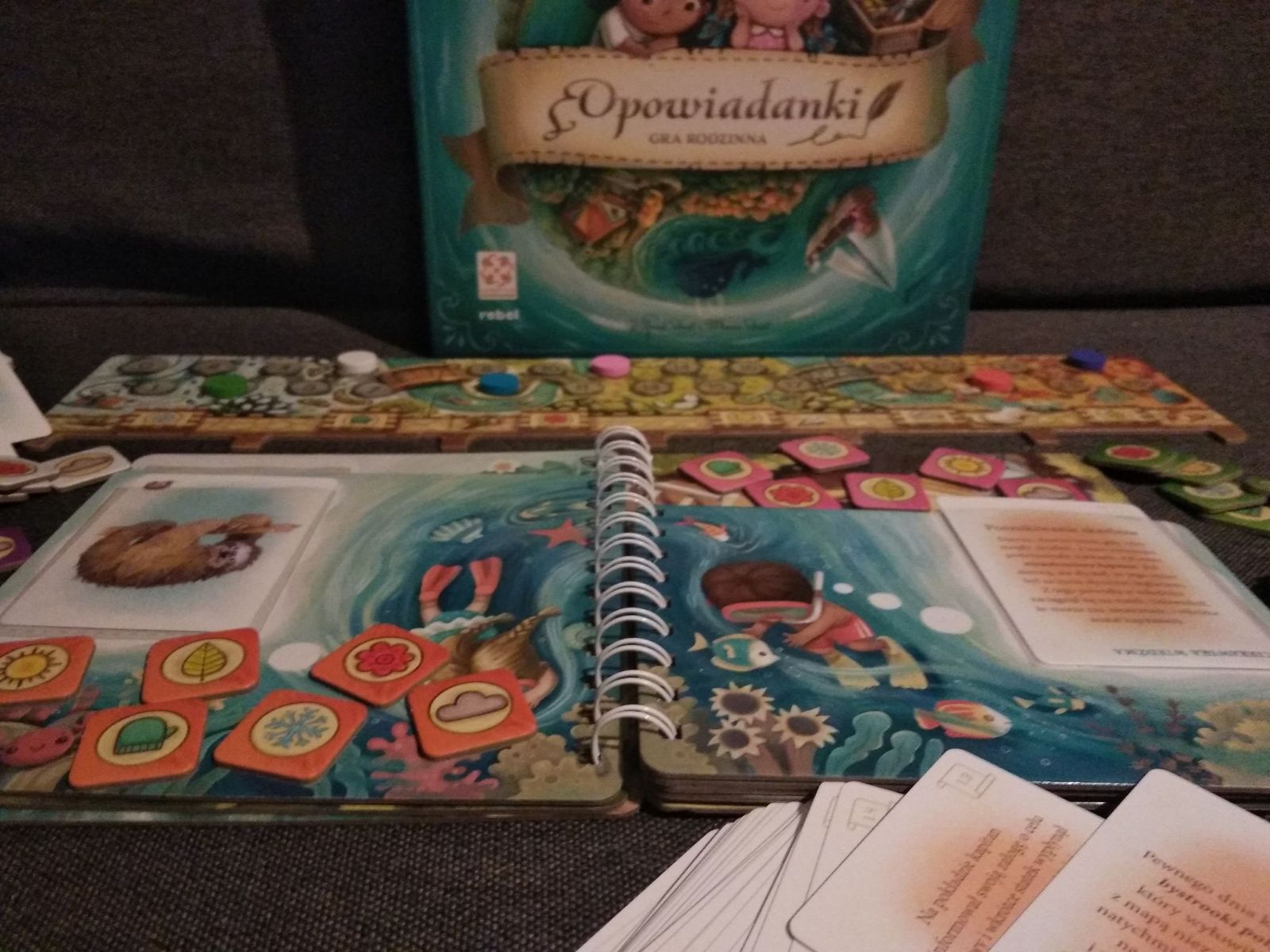 The box looks like a big book with cheerful worms sticking out of it, and inside you can find interesting stories and rare game mechanics. After lifting the cover, the manual appears, and then a book in the form of an album, consisting of eight cardboard cards, which looks like a notebook with beautiful illustrations and pockets. Underneath is a voting and scoring board, resembling a large puzzle, six player markers each with its own color, thirty-six voting tokens (six for each participant), and cards: thirty-eight double-sided stories and eighty-six characters, i.e. pets.

We start by placing the book in the center and opening the first page, folding the board and placing it below. You then choose a story and draw all the cards associated with it. Everything is numbered and each story has a color. Put the rest in the box. Arrange the cards in ascending order, insert the first story sheet into the right pocket with the book symbol. We put the rest next to it. Each player receives his marker and six tokens (in his color) to vote. All pieces are placed at the beginning of the board. We shuffle the sheets with the characters, and all participants get five cards, the rest are a deck. Then you take the first character card from the deck and put it into the left pocket with the paw symbol – this is the first hero of the story.

The stories consist of seven or ten cards, and the game is played over five rounds. In each of them, select one pet that best matches the Novel card in the round. The role of characters is bold and italicized. Choose a narrator from among the players who starts reading from the first card, then turns the page and inserts the second card into the appropriate place in the story, and introduces the next fragment. Now each participant chooses the pet that he or she thinks best fits the description and places it facedown on the table. The storyteller then shuffles the sheets and flips them over below the board so that each pet matches the one symbol on the bottom. Everyone votes for one story hero and places a vote token with the appropriate symbol on the table. You cannot choose your card. Then the chips are turned over. The participant scores one point for each vote next to his character card. Now you can move the marker by the number of points scored and slide the winning pet to the right place. Put the used cards aside and each one gets a new one from the deck. The game is over when we put the last character sheet into the pocket in the book. The person whose marker is farthest on the board wins. There are other game modes and rules for e.g. two players. 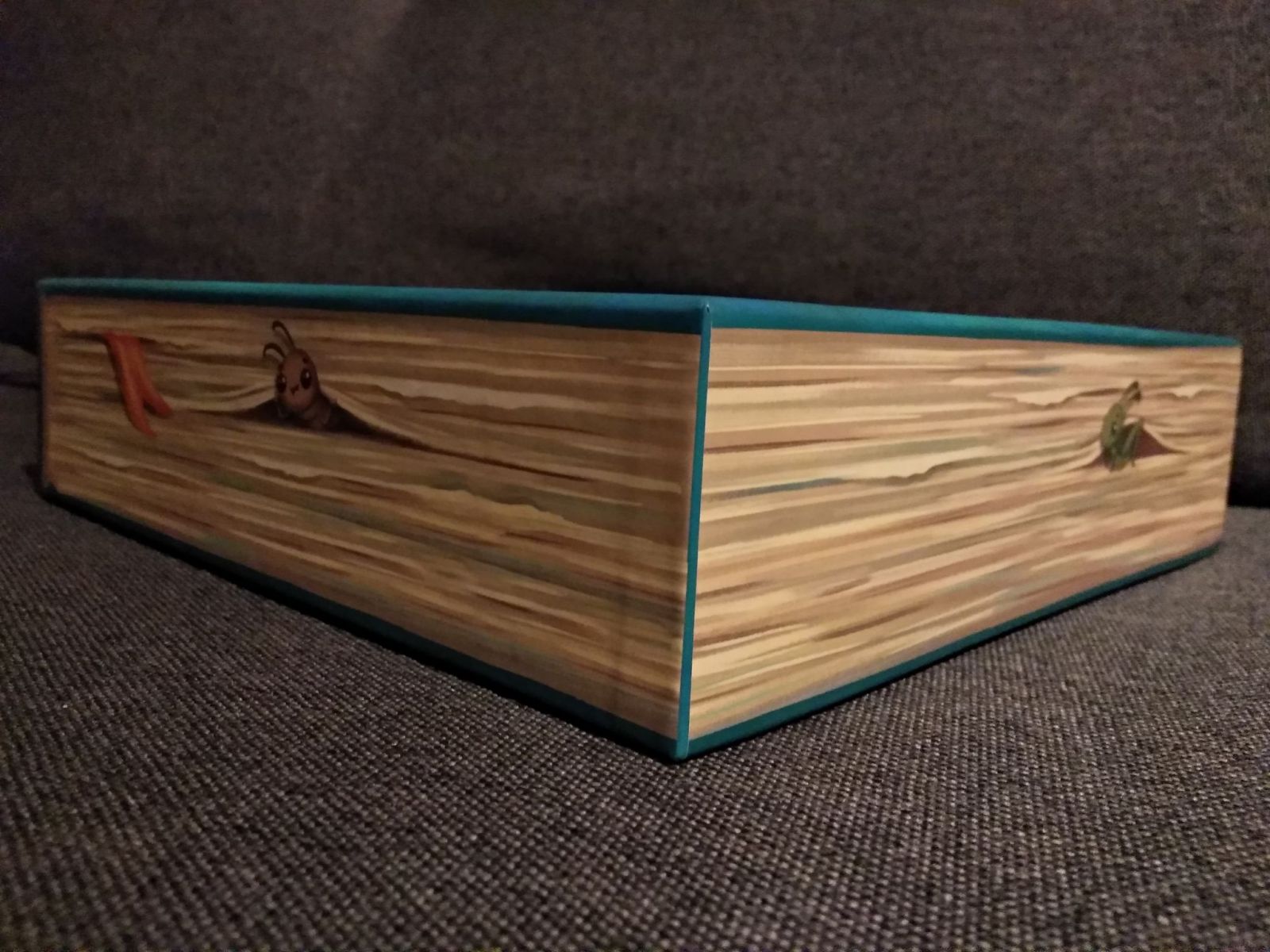 The binding is gold!

I am in love with simple rules, magical illustrations, interesting stories and unusual dynamics of the game. Even though the gameplay is not very long, the combination of a board game with a book bought me completely. I didn’t think I would get into that much. So far I have played with two people, but I feel that if there are more participants, it will definitely be even better. And I can’t wait for my son to grow up!

The biggest advantage of Stories is the ability to create various stories. It can be different each time as there are a lot of character cards. This is a really nice proposition for families with children over five years old. Not only is the time spent together, but also creatively and without electronic gadgets. Like a small book, but with enormous power. All the illustrations are beautiful and you can see that they were created by real professionals. Since they charmed me, the younger ones will surely like them too. You can see for yourself in the pictures how it looks like a fairy tale!

Rebel delights me with its polished boxes every time, but in this case they really climbed to the heights. Everything is perfectly measured, nothing flies or moves. Even the puzzle board has a cut-out space for insets, and each player marker has a separate compartment. Literally made to measure. It shouldn’t be that surprising, but it is very conspicuous and shows great professionalism in production. In addition, the whole thing looks like a novel, and on the sides of the cover you can see pages, as if it were a book – a fairy tale! 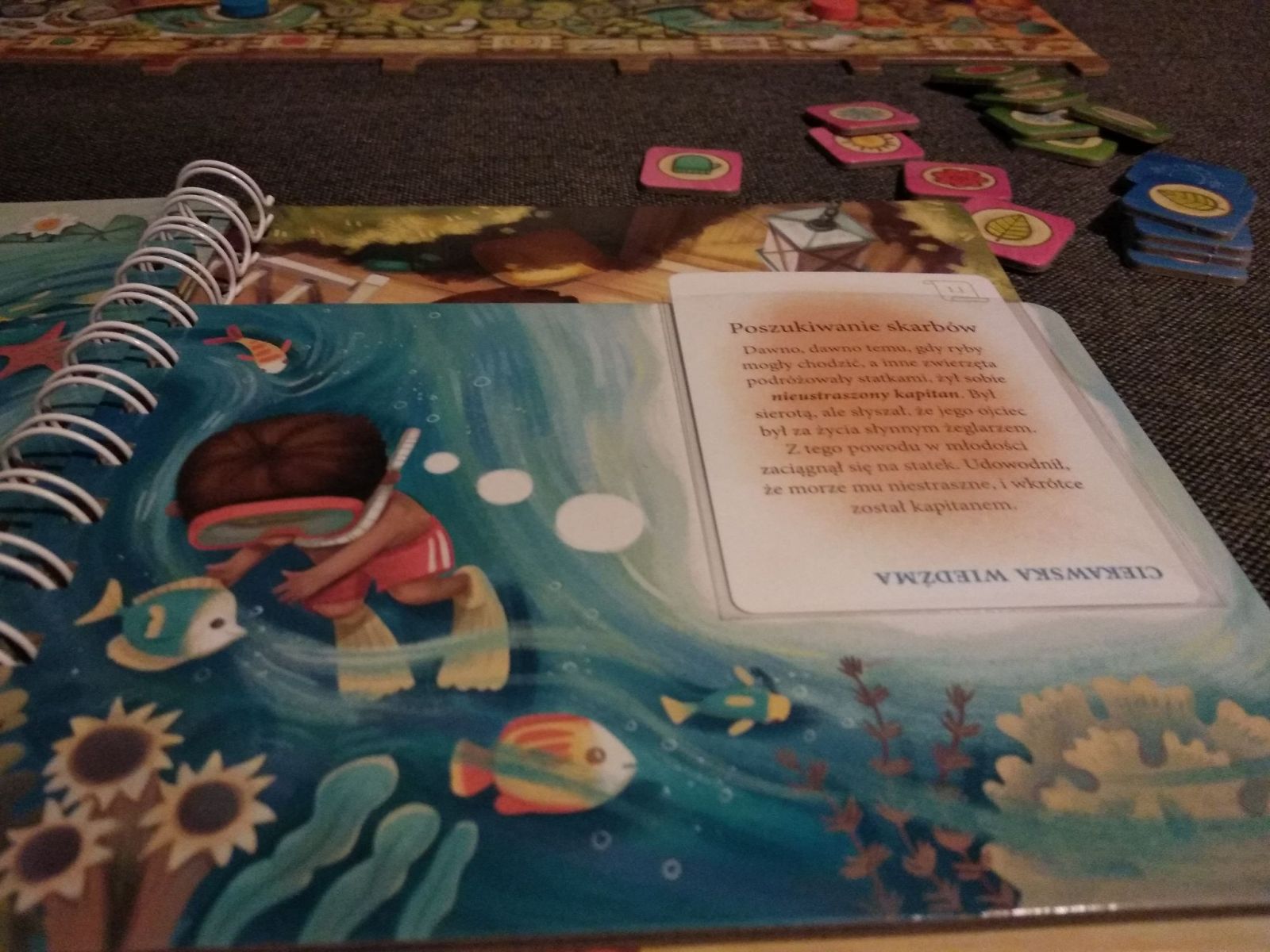 One round lasts about twenty minutes and you feel like you would like more. Of course, every story is polished, but you want more. This is not really a flaw, but rather an observation. I just like long games. Another slight downside is that you can only learn ten different stories. Of course, other characters appear, but the plot repeats itself. I feel like you might just overeat it when you play it a lot. It’s nice as if there are supplementary cards where there will be even more interesting stories.

Stories is a very good family game that engages both adults and younger household members. The box is not the smallest, but it is also not overwhelming and you can always take it for a trip. Even though there are markers and points are counted, there is no feeling of competition, the game feels more cooperative in creating an interesting story. I believe that this is one of the best family offers on the market, which may not have complicated dynamics, but it makes it possible to spend time in the privacy of your home nicely. As soon as I think about the Stories , I immediately have a smile on my face, and the words “warm” and “dear” pop into my head.

The papers show that a Master of Science (MSc) from the Lodz University of Technology, however, they cannot find a job. A free spirit looking for his place on earth, a big fan of all kinds of series, especially Supernatural, Teen Wolf, American Horror Story, but there is nothing to limit yourself to. A book-alcoholic (not for customs and history!) Of the first water, which will probably die overwhelmed by his "small" crops. Seemingly busy, but she hasn't gotten her precious yet. He likes to laugh, read and have a good time. He dislikes rudeness, hypocrisy and hopeless people. A good friend of Deadpool and Doctor Strange.

Games for two - a proposal for Valentine's Day

We solve the mysteries of the lost expedition ... - review of the interactive book game "Diary 29. Awakening".

Results of the Fantastic Last Tavern plebiscite of 2020!