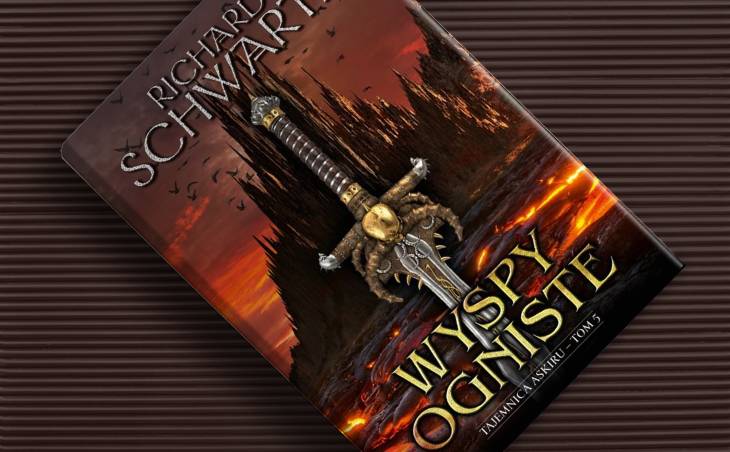 This week, on June 11, the long-awaited fifth volume of the Tajemnica Askiru series  from Initium Publishing House will be released! There is an even greater dose of action ahead of you, a completely new scenery, and above all a brutal fate, which again does not spare the heroes - that's all Richard Schwartz specializes in.

The dangerous, even breakneck, mission of the half-elf Leandra, ambassador of the kingdom of Illian, continues. The mighty maestra together with the legendary warrior Havald and a group of daredevils finally leave Besarajn, to cover the last stretch of the road to Askiru on board the ship. There, they hope to gain allies in the fight against the all-powerful empire of the necromancer emperor. For Havald, the voyage ends prematurely: when the ship is attacked by pirates, the warrior goes overboard and is tossed by the waves to the Isles of Fire, where the sea robbers have their base. But there is another, much greater threat lurking in the corsairs’ den.

The above description is provided by the publisher.

Good news for all fantasy fans: Richard Schwartz returns to the bookstore with the fifth volume of  The Secret of Askiru: The Fire Islands. Once again, we find ourselves in the middle of the novel, which for old-timers may be associated with old-school RPG games like Baldur’s Gate.  It consists of one main character, a team of his companions, the theme of a twisted journey to the destination, and well-known characters: dark elves, necromancers, assassins, and now also pirates.

Because this time Havald, Leandra and the rest of the team descend from the mainland and find themselves in the open sea and the islands surrounded by it. One of them is the title Fire Islands – a place as dangerous as its name indicates. There, too, new challenges await them, even more difficult than those they have faced before. In the meantime, the bitter truth about Askira will also reach them. It is not what they have imagined so far.

Everyone who is impatient has reason to be pleased, because the heroes finally leave Gasalabad – the current place of action – for good, and are already halfway on their way to their goal. Dear, the end of which we will know soon, because there is only one volume left to the end of the series. Therefore, do not hesitate and get your own copy of the Fire Islands . It will happen on June 11. How about an epic naval battle?

About hunters who mainly ate pizza - a review of the book “Midnight Chronicles. The Power of the Amulet "

New novel from the Assassin's Creed series: Valhalla is coming!

Final Fantasy is coming to E3, but that's no reason to be happy

09.06.2021
« Previous article
From Wattpad to the bookstore - presale of Katarzyna Tkaczyk's "Iskra" is in progress! Next article »
Return of "Deadpool" aka Ryan Reynolds and a mysterious photo
For beer