After two science-fiction music videos, it's time for a change of climate. This time a real horror movie awaits us - it's time for Michael Jackson's Thriller !

There is only one king

Michael Jackson was undoubtedly a great artist. He is an outstanding singer, but also a composer and dancer. His career, which apart from big hits, was full of scandals, became part of the musical history. The artist himself, in turn, was called the King of Pop and although he has not been with us for over ten years, still no one is able to dethrone him. It all started when the singer was 6 years old. Already at such a young age, he belonged to the family band The Jackson 5 and showed that he has quite a talent. His voice was not changed by the mutation and Michael began a solo career. In 1971, he released his first album Got to Be There . The greatest increase in its popularity was in the 1980s. It was then that the albums Thriller and Bad appeared. The albums sold over 100 million copies each, and the songs did not leave the top of the charts. And although Jackson’s career lasted a long time, and he could celebrate more triumphs during it, we stop at the years 1982-1983 and the already mentioned Thriller . It was the title track from this album that revolutionized the approach to music videos. By the way, it fits perfectly into the theme of our Fantastic Music Videos series, and therefore we will take a closer look at it. Dance of the living dead

A young couple in love is going on a trip together. During a romantic night out outside the city, the boy confesses his love to the girl and proposes, and she happily accepts the engagement ring. What she doesn’t know is that it hides a secret that comes to light moments later, when the clouds reveal the full moon! The young man turns into a werewolf and starts chasing his beloved. It quickly turns out that this is just a movie that is currently being shown in one of the cinemas. There are several people in the room, including another couple in love, very similar to the one on the screen. Although Michael likes the production, his partner is not thrilled and leaves the room indignant. He, as befits a true gentleman, follows her and quickly manages to improve her mood with his singing. Meanwhile, zombies begin to form from their graves in a nearby cemetery. They quickly go out into the street and circle the main characters. She screams in terror, and he … also turns out to be an animated corpse! Together with the other undead, he begins to dance to the beat of the music. The girl watches this play for a long time, then runs away and hides in an old, abandoned house. The revenants do not let go of her, chase her and break windows and break rotten boards, rushing inside. Finally, the zombie-Michael gets her! The girl screams, closes her eyes, and when she opens them, it turns out that everything was just a dream (or hallucination). Her lover is with her, comforts her and soothes her. The hugs walk away, but he still turns to us, and his eyes glow ominously. But it’s not over yet! We have the end credits, Contrary to the Blue and Ooops… I did it again discussed in the previous parts of Fantastic Music Videos , the lyrics of the song Thriller closely correspond to the plot of the video. Michael sings to us about the evil lurking in the night, monsters coming out in the light of the full moon, beasts, fear and helplessness of the victim. During the song, we can also hear the voice of the voiceover (who is the famous horror movie actor Vincent Price) also talking about the phantoms from the tomb, the stench of decaying bodies and the fear they cause. It should also be added that Jackson himself mentions that he can protect us from zombies. So we have almost everything we see on the screen. Only the dance and choreography of the living dead are mentioned. 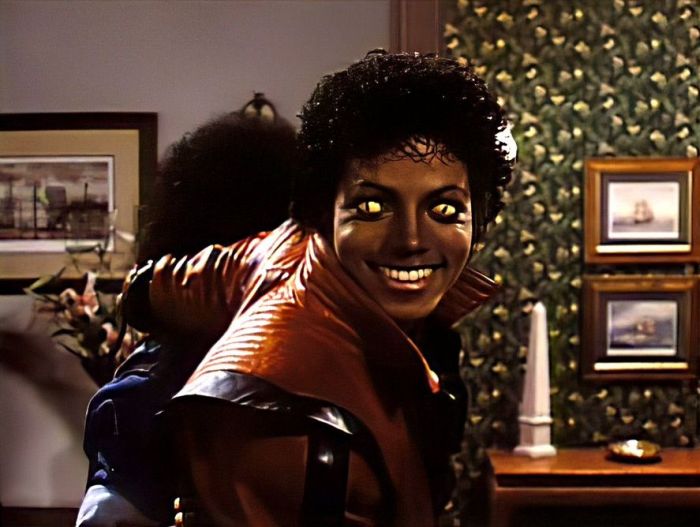 As already mentioned, Thriller was a breakthrough music video for the entire music industry. Previously, music videos were shot most often in the studio, and they showed mainly (or only) performers and resembled fragments of concerts (and often they were). Michael Jackson’s video clip stood out – it had a story, told a story and felt like a movie. It lasts over 13 minutes and can actually be called a short film. Of course, later artists rarely created such long music videos, but often they tried to take place somewhere in the field and tell a story, and not only show us singers, guitarists and drummers at work. So if not Thriller , n e also would create our cycle!

And how does the clip look like after many years? It was carried out on a grand scale. He was given the entire script and directed by John Landis, the man who gave us such productions as Blues Brothers , Unexpected Change of Places and Beverly Hills Cop III. Make-up artists and the entire zombie-dance team were involved in the performance. The plot itself is like a B-class horror film. Naive, hackneyed, but above all funny and worth watching. The special effects do not look tragic even today, and in 1982 they certainly caused admiration. As for the living dead themselves, I think that George Romero himself would not be ashamed of them, and perhaps he would even involve them in one of his titles. The music video’s invaluable impact was sealed by the fact that it made it into the Guinness Book of Records as “the most successful music video”. So he deserves respect and has to be seen again. Even for the dancing revenants themselves!

"A Plague Tale: Innocence" will have a sequel - it has just been shown

"Evil Dead Rise": The Book of the Dead will return in the sequel to "Evil Dead"

The producer of "Resident Evil" leaves Capcom for Bungie

31.05.2021 0
« Previous article
What makes a person unique? - Review of Kazuo Ishiguro's Clara and the Sun e-book Next article »
The Powerpuff Girls: Check out the new costumes and the Powerpuff Girls house
Fun facts