The inhabitants of Gorzów decided to show again that in their city there is no shortage of fantasy fans characterized by writing skills! In the latest issue of "LandsbergON" we get stories straight from fairy tales and legends.

This is the sixth issue of the LandsbergON fantasy magazine from Gorzow. Like all the previous ones, this one begins with the introduction of the editor-in-chief, Mariusz Sobkowiak. This time, the originator of this semi-annual not only tells us about what we can find on the following pages, but of course also adds a few words from himself. We learn, among others why fairy tales are so important to the entire fantasy world. He also cites a curiosity about Hansel and Gretel and the dark history of the Sleeping Beauty and Little Red Riding Hood . From the very beginning we can guess that the latest issue of the “LandsbergON” magazine, although full of references to fairy tales, will not be aimed at the youngest audience.

About elves and kings

There are four different short stories in the latest issue of LandsbergON magazine. One of them is called Pegasus , and its author is Hihi Kalisiak. It tells about elves breeding winged horses straight from mythology for … slaughter! I must admit that as a long-eared fan, I never thought of this breed that way. Although of course I know drow or other dark elves, I have always seen dignified and wise creatures in them like the Elrond from Tolkien’s books or Corellon from Dungeons & Dragons . Meanwhile, Kalisiak presented them with a darker side and many of us will find references to human behavior here. I would not like to reveal the details to anyone, but I assure you that the text can make you creep and give food for thought.

The second of the shorter stories that we will find on the following pages of the magazine is a short story about how the Marshal, together with dignitaries, wove a web of intrigue against the future kingby Jerzy Gaśpie. Thanks to him, we move to the royal court and delve into the world of politics. And here, as always, we will have arguments and showing that they are equal and more equal. In this humorous story, we can easily find references to the real world. On the other hand, the interpretation and answer of which of the famous politicians we substitute in place of the Marshal, Chaplain or the King will certainly depend on our convictions. The author deserves a bow because he has managed to present the story in the most neutral way possible, so that no one would shout at him that he was in favor of a political party.

Dragons on the rise!

Since the texts contained in the magazine are interspersed with images, I will do the same and, before moving on to the next stories, I will mention the drawings. Already on the cover we can see the dragon that crouched and entwined the tower of the Gorzów cathedral, which burned down in 2017 and is currently undergoing reconstruction. As the author herself claims, it is a protective dragon, which is to protect the building against further fires. However, it is not the only lizard in “LandsbergON”. In total, we will find drawings of as many as five giant reptiles, and all of them were created for us by Anna Kowalczewska, who, apart from painting and RPGs, also writes. She is the author of the Book of the Elect: Breath . Returning, however, to the fire-breathing beasts, I am sure that her works would not be ashamed in the bestiary for Dungeons & Dragons, books about The Witcher or Blizzard Entertainment when creating new cards for Hearthstone . In addition, the following pages contain a demon by Piotr Rossa and an extremely mysterious individual painted by Leon Bakalarz. Both works certainly embellish the sixth issue of the Gorzów semi-annual. 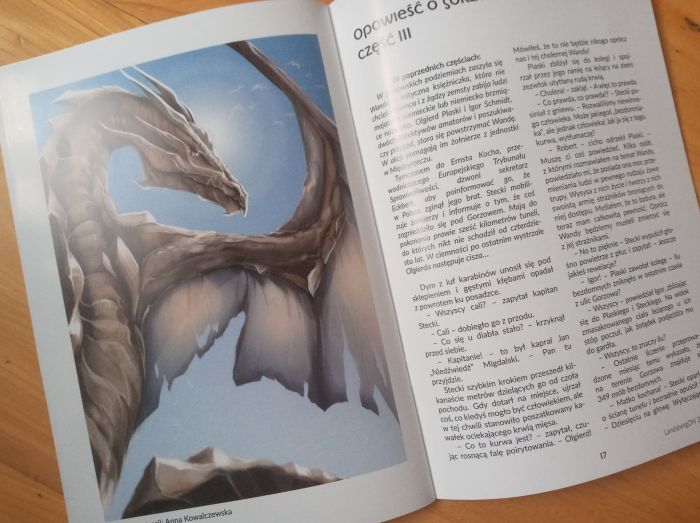 Or maybe a book?

Let’s go back to the stories that we find in the newest issue of “LandsbergON”. Another of them was written for us by Paweł Karolczuk, and its title is Once Upon a Time … We move into a post-apocalyptic world, where books and fairy-tale writers have disappeared, and fairy-tale villains have taken power! Baba Yaga, the Bad Wolf or the Giant have destroyed what is good, they have killed most of the people and are enjoying success. The only hope in the Great Tale, which tries to bring back the good endings. To this end, he sends his people to collect forgotten books. However, the missions are dangerous and not everyone has a chance to return …

At the end, we will visit Gorzów itself, or rather in its canals, where the mythical Wanda reigns. It is another part of the story invented and written by Jakub Łukasik. Personally, I am a fan of the story and I couldn’t wait to pick it up again. The author did not disappoint my expectations. It is dark, mysterious and bloody. There is also an intrigue plotted by people above. And as always, I have one remark – why does everything end so quickly and in such a dramatic moment? Apparently, Mr. Jakub wants us to wait impatiently for the next number. Or maybe a book will finally appear that tells everything related to Wanda? Anyway, I think that also mentioned Once Upon a Time …is an excellent introduction to a longer novel. And then just wait for everything to be transferred to the screens!

The latest issue of LandsbergON is really great and I’m not writing this to please the authors in any way. This is my honest opinion and I will defend it. You can see that the inhabitants of Gorzów can write and they do it with pleasure. Each story is captivating and the images are beautiful. I would never have thought that all the people I mentioned are amateurs, just starting their literary and painting adventures. The editorial office also deserves a big plus, as it has probably selected the best stories and handed them over to us. Thank you for the right choices! Anyway, words of appreciation for the NOVUM Association, the publisher of “LandsbergON”, are due not only to a fantastic magazine. It is thanks to them that even Young Citizen is published , and OLKA was establishedthat is, the Civic Lubusz Card. On behalf of myself and the Last Tavern, I wish you more great initiatives!

Is Opole also fantastic? - review of the magazine "Imaginarium"

05.05.2021 0
« Previous article
CyberpunkD-Action - a review in the neon light Next article »
"New Mutants" based on Marvel Comics coming soon to DVD
Fun facts