This site is translated into English automatically from original page in Polish
EN PL
by Judyta Nowak
on 19.04.2021

A lot can be said about the actor's remake of the animation classics, especially if we take into account, for example, Disney, which for several years has been adapting virtually each of them into an actor's film - for example , Cinderella, Beauty and the Beast . He handled the theme of live action movies differently. The creators of the quite popular Winx Club fairy tale came up with a similar idea, a remake in the acting version . How did they do?

The story is quite simple

The plot is basically about life in a school for fairies and specialists (something like magic special forces). Bloom, an American who has no idea about the magical world (she has magical powers, but learned little before), ends up here. She befriends several girls, also fairies, and learns that she has great power, and that this world and her past hide many secrets and dangers. Alfea School is nothing like the friendly place that was the one from the animated series. In addition, I am concerned about the security system in this educational institution. An ideal example here will be keeping a dangerous creature in an ordinary tin. Yes, you can find friendship here, learn something, have fun, but it is not such a candy and mega-magical place. The whole world, despite the skills of the heroes they demonstrate on the screen, seems quite normal.

I don’t feel the magic

The world does not seem unusual, and the music is quite modern and well known to us – viewers (eg Dua Lipa, Nothing But Thieves ). At the same time, the main character claims that there are little or no fairies. Most of the students seem to come from Earth: they know Earth technology and culture (normal speakers, habits, read Harry Potter and do home assignment tests). I don’t know if this is due to any tendency to make everything credible. Usually, when two unknown worlds meet each other, the heroes show at least a bit of surprise, interest in what is new, what is unknown to them. They don’t take it on the principle : actually …, but you have a nice T-shirt so that you can quickly change the subject after a while (e.g. toyou are adopted ). Actually, it’s as if someone set up exactly such a school in England and just said – well now you have this power (and let’s sing together like Elsa in Frozen) . But on the other hand, it’s good that the developers had their own idea of ​​the Winx world .

The magic elements of the series are quite fine if we take them with a pinch of salt, considering that the characters are only learning certain things. As for the characters, perhaps the main problem is that they consider themselves adults without being adults. And swearing, drugs and strange texts will not make them age, and it actually makes them more fun and childish. Some scenes are needed – neither plot development nor character evolution. I’m sick of Sky’s dazzling chest. As for Bloom, she may actually be a bit annoying (she consistently made the same mistakes), but she missed, in my case, the list of the most annoying main characters. And it certainly isn’t as annoying as Sabrina ( Chilling Adventures of Sabrina), which made it impossible for me to reach even the end of the first season. Some of the characters move schematically, according to stereotypes: athlete, nerd, rebel, chick looking crazy, extreme empath, girl with weight problems, excellent student with a high level of truthfulness, popular, yet beautiful and spoiled rich woman … looks at first glance, because the characters develop over the course of the episodes, gain new features and step out of the previously imposed template in small steps. Relationships between the heroes are also built much too quickly. There is no surprise here, no fear of the unknown, which would characterize the characters – but here, too, I would ask you not to overdo it. In addition, some people do not learn from their mistakes and commit them practically every screen minute. The world in which the characters live is not simple at all, often filled with suffering and brutality, although there is a lot of good and joy in it.

You cannot really fault the dialogues, they are definitely not artificial. And there are some really funny retorts:

Sorceresses often sit up to their armpits according to their will. – Aisha to Bloom.

So what’s your plan, Army Barbie? – Aisha to Stella.

There is no shortage of secrets and interesting plot twists. Therefore, I treat an attempt to create something new, and not just a faithful copy of a fairy tale (only with actors) as something good. The plot can sometimes surprise you and is not painfully predictable. Overall, I like the fact that those glittery, skimpy outfits of the characters from the animated series were not transferred to the screen. The creators also managed to avoid the extreme simplicity and repetition of the plot, in the animation the same threads were repeated many times. I just wish I could feel a little more magic of this world.

We only saw a few episodes (the season was only 6). It is known that this is not something as epic as The Lord of the Rings or Game of Thrones . But I don’t think anyone expected that from the show. It wasn’t meant to be a title that would become iconic. It does not stand out from this type of production, simply. It has many shortcomings, but it is not something that cannot be improved. Even at the script level. Consistent plot handling in subsequent seasons, as well as new secrets and answers to questions posed in the first season (e.g. the origin of the main character) may allow the series to become a tolerable fantasy production. I do not predict success for him.

It’s hard to say who the show is aimed at, putting aside what Netflix is ​​suggesting to us. Is this a series for adults who watched the animated version of Winx as a kid , or maybe for teenagers? It is certainly not a production for young children, although they will probably watch it anyway. 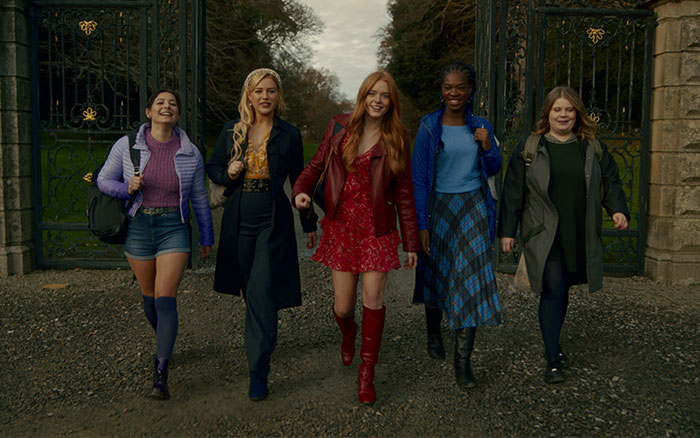 I thought it would be tragic, but it wasn’t that bad – the show surprised me pleasantly. I don’t know if I will be watching the next seasons (and the second one has already appeared), maybe only to see what happened next. Somehow I didn’t get attached to the heroes. I will definitely not be one of the people waiting for the next episodes, but I understand why they are being made. And I will look for something not necessarily for teenagers.

If you have some free time and want to check if you can correctly transfer the cartoon to the drama series, then you should watch Winx . The production is full of action, you will not be bored, and there will also be an opportunity to laugh.

CosplayWDomu - there are a few days to join the competition!

The premiere of "Steel Rats. Fort 72 ”by Michał Gołkowski