This site is translated into English automatically from original page in Polish
EN PL
by Bartosz Stuła
on 08.01.2021

One of the common features of European comics is the presence of stories about two heroes who go through many adventures together. Asterix and Obelix, Kajko and Kokosz or just Mortadelo and Filemón. You may not have heard of the latter.

My passion for Spanish-speaking countries, resulting from my professional work, meant that a few years ago I came across a comic book in one of Madrid’s bookstores. I spontaneously spent 10 euros to meet these unusual two. But let’s start from the beginning.

According to the legend, the author of the adventures of the most famous duo in Spain – 22-year-old Francisco Ibáñez arrived at the Bruguer editorial office in 1958 with illustrations under his arm. He probably had no hair then. Accordingly, his characters were also bald.

The cartoonist brought a project consisting of black and white comics about two rather clumsy detectives. There were many versions of the names of the main characters, but the publishers ultimately liked Mortadelo and Filemón. The first adventures of the two were published in the children’s magazine Pulgarcito in 1958 and won the hearts of both younger and older fans.

Mortadelo and Filemón are primarily detectives who handle very small cases. For many in this early period, the cartoon was a parody of Sherlock Holmes and Dr. Watson. Mortadelo was the only employee of a detective agency, very innocent and naive, and Filemón was in charge of him, often scolding his subordinate without understanding many of his jokes. 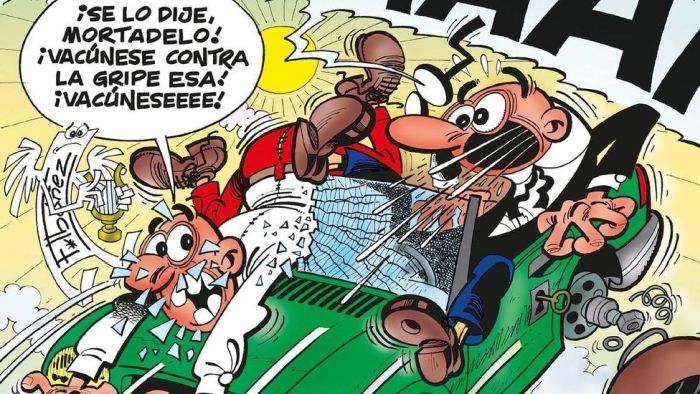 Where’s the place for fantasy?

In 1969, the publishing success was so great that the Bruguer editorial team decided to create Gran Pulgarcito , a larger and wider magazine in which stories about Mortadelo and Filemón turned into long adventures. The first is the unforgettable El sulfato atómico. Everything changes in this story, and Mortadelo and Filemón become special agents of the TIA organization supervised by Super Vicente and assisted by their professor Bacterio. This is where the first incredible elements begin. We have many references to all sorts of science fiction. In the first story, two bald agents must stop Central and Eastern European General Bruteztrausen who has the ambition to dominate the world. To achieve this, he uses atomic sulfate, Professor Bacterio’s invention to eliminate pests from crops. Its real effect, however, makes the insects grow like Ant-Man turning into a Giant Man.

The success of the published adventures led the editors of Bruguer to create another magazine – Mortadelo – in 1970. Twelve months later, the Olé collection began , featuring comics in softcovers. Each of the long stories was individually released.

The series has been released so far and has undergone many transformations. In 1988, Ibáñez lost the rights to his beloved characters (as you can see, copyright complications were not only an American phenomenon), and in the early 1990s, the focus was more on presenting the adventures of two detectives in the real world, and their behavior was to show the greatest vices consuming Spanish society. Nevertheless, for twenty years stories filled with extraordinary events have been published. Even Superman showed up. What does DC Comics say? Honestly, I don’t know, because there is no information about the Man of Steel in the footers. Certain caricatures of other characters also had a cameo. However, these were still redraws. Superman (and its logo) has appeared in several stories, and I’m not talking about Mortadelo magazine , especially the issue of The Last Son of Krypton. Well, it sure is interesting. 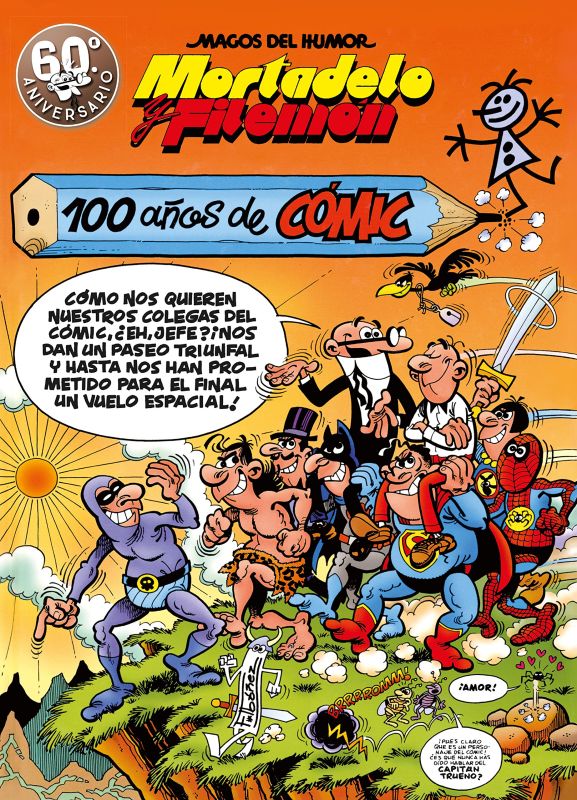 Can I meet them in Poland?

Yes, although it is extremely difficult. In the years 2004-2005, the Kasen Comics publishing house published two stories with two bald Spaniards, and these were reprints of French editions. In 2004, the movie The League of the Stupid Gentlemen , which was an adaptation of comic books about Mortadelo and Philemon , appeared on the screens of Polish cinemas . As you can see, these are not very popular characters in our country.

However, it is worth remembering that since this year’s trip to Spain may seem less possible (for obvious reasons), remember that you can bring this interesting comic closer to you. I recommend it, because thanks to this, we will move to the sunny Iberian Peninsula for a while.

A team for special tasks - a review of the comic book "Authority", vol. 1

The demon slayer is born! - review of the comic "Dororo i Hyakkimaru" vol. 2-3