This site is translated into English automatically from original page in Polish
EN PL
by Bartosz Stuła
on 21.11.2020

Polish comics about superheroes can be interesting or very embarrassing, while imitating in a very unsuccessful way their prototypes from overseas. What if we add a little bit of the European Union's social program to that? There may be an interesting lesson for the youngest, but for older readers it will still be something of little interest.

Twardowski, we have a problem

I think it hurts Europeans to think that at present, however, the power over culture, especially the mass culture, is exercised by the Americans. It was they who promoted not only the film, but also the comic. From time to time, however, there are attempts to meet the competition from the New World. Is it good for you? I think so, as long as you don’t copy the American style and take quite interesting characters.

Paneuropa vs Smog follows this path .The interesting story that the authors are trying to tell us becomes confusing at certain points. In general, I strongly respect that the creators undertook to popularize European mythologies and modernized them a bit so that they could cope with superheroes from the largest publishing houses. Most of these heroes are correctly portrayed in my opinion and fit into the plot. Among the Polish canon, the authors decided to choose Mr. Twardowski as the head of a group of mythical superheroes. His creation neither resembles himself from folk tales, nor something like Doctor Strange or Doctor Doom. Besides, he is not a very familiar character from Polish folklore to other Europeans .. Since the comic was addressed to recipients from the European Union, you could reach for characters such as the Wawel Dragon or even the Warsaw version of Basilisk, 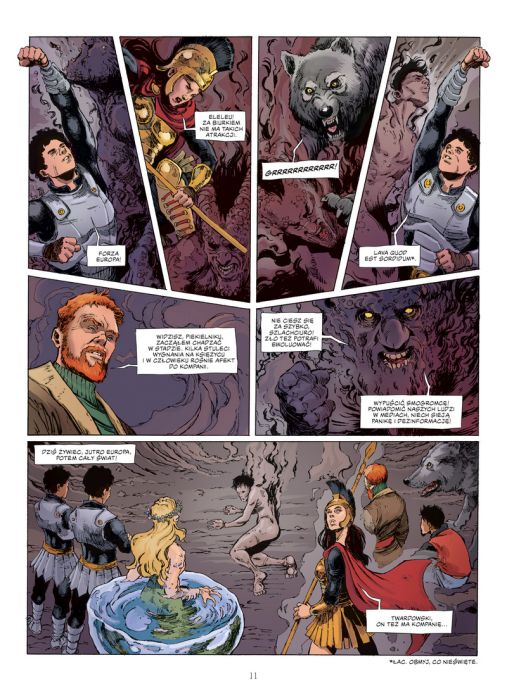 The whole story in the comic is about fighting the dangers of air pollution. The main antagonists are magic Smog. In my opinion, he is probably the most interesting character in this story. Originally drawn figure, whose powers are really strongly emphasized by numerous lines, and gives a specific density to this poisonous atmospheric phenomenon. However, Smog himself, apart from determination, bad behavior and extremely terrible appearance, is not a deep character at all. He has absolutely no motivation whatsoever, unless we consider it to be the sale of second-hand cars that pollute our air.

What is the greatest advantage of this comic book? Exquisite drawings that Marvel, DC or Francophone authors would not be ashamed of. Caring for the details of characters or cities, while blurring these objects during clashes in comic book frames, is amazing. The use of chiaroscuro gives me the impression of communing with a cinema film filled with a large dose of special effects. The heroes themselves have perfectly painted faces; you can see their every grimace, every emotion. The visual layer is at the highest level here. I am also glad that it was decided to create more than one cover. Next time, maybe it is worth to include not only Polish cities?

And from the narrative, I would add that only the past of the characters, gradually discovered by means of flashback, gives a certain feeling that maybe in a few numbers (if the authors will continue to create similar stories) we will get something really interesting. I also appreciate that the characters sometimes speak their national languages. This only gives some form of realism to the world of knitwear. 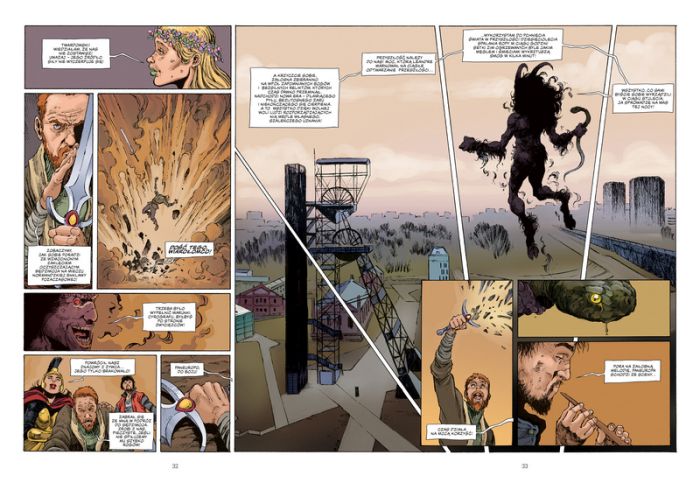 I’m not a fan of native comedians, but I think we have really good cartoonists. The main problem of Polish comic booksellers lies in the script and the lack of ideas. It is not a good idea to put Poland at the center of the narrative, because what villain would attack European Union industry, starting with Poland? I also believe that the number of foreign heroes could be increased and the idea of ​​Twardowski could be considered. Stanisław Pagaczewski brilliantly made a kind of reconstruction of the Wawel Dragon. Perhaps it would be worth considering the Twardowski myth in a similar way?

An outstanding idea – showing that even in the face of the invisible threat of smog, European countries are able to forget about their differences and quite brutal history and merge into one – is the overriding value of this title. This problem is presented quite subtly, so I do not have the feeling of being in touch with one of the didactic history comics that use purely “pathological” methods, although the authors could still work on it. The storyline could also undergo some modifications, balancing the balance between Poland and other European Union countries, or implementing other, more interesting characters from Polish folklore. But I certainly wouldn’t change the pictures. Brilliant stills are why this comic book is worth reaching for.

When the psyche does not hold up - "Batman: The Last Knight on Earth" review

Challenge (us) together with fears - review of the comic book "Smurfs and the world of emotions. The Smurf who was afraid of the dark "