This site is translated into English automatically from original page in Polish
EN PL
by Maciej Bachorski
on 07.02.2021

He is passionate about old school science fiction horror films in the style of "Alien", "Something" or "The Hidden Dimension", rock / metal music and decent (that is, not only single malt) whiskey. He wrote for "Wiedzy i Życie", "Playboy", "PIXEL" or "PSX Extreme", and now you will meet him from time to time in "Nowa Fantastyka" and regularly in "Netfilm".

With games from Krakowians from the Bloober team, I had a problem with repetition for some time. Certain gameplay solutions seemed to chase the heel and more and more often I had the impression that I was watching a twin-similar production set in a different setting. Against them, The Medium appeared as a breath of fresh air at the announcement stage.

There was obviously something to get excited about: an idea for simultaneous gameplay in two realities, fixed camera angles straight from the first installments of Resident Evil and Silent Hill , or a storyline that focuses on touching difficult issues, dripping with references to Polish history. The Medium clearly had the potential to shake up the genre of virtual horror. After a few hours, which I needed to get to the credits, I can write with some relief and a calm conscience that even if not everything – especially in technical terms – was 100% successful here, we are definitely dealing with an extraordinary game.

Between earth and hell

In The Medium we play the role of Marianna, a young woman with extraordinary, psychic abilities that allow her to contact the spiritual world. Attempts to use this gift to console those who suffer from the loss of loved ones, by no means take place for our heroine in such a positive tone as in (by the way, excellent) Doctor Dreams– Throughout her life, Marianna feels left out of the social bracket. Moreover, he does not know his entire past, wandering endlessly around foster families. The action of the game begins when the only person who has accepted her as she is dies, and the shattered heroine receives a call from a mysterious man. A certain Tomasz pleads with her to come to the abandoned Niwa holiday resort, offering help in unraveling the mystery of her origin – and when Marianna, guided by her intuition, finally ends up there, she quickly realizes that the place has become a silent witness to unimaginable tragedies. How are they related to the heroine’s past? We will have to discover it ourselves. 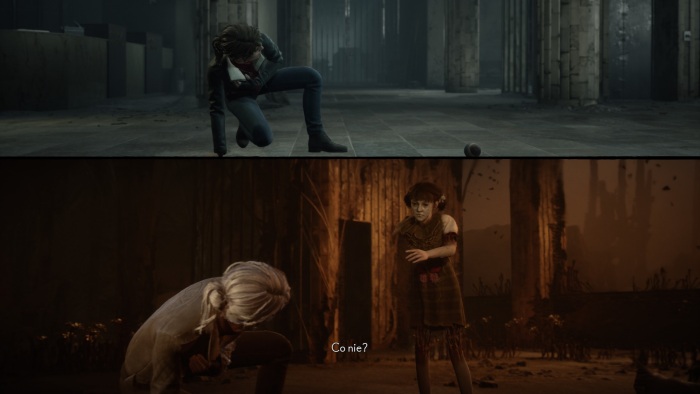 Early in the game you get the impression that the scenario will definitely be one of The Medium’s strongest points, and it is indeed. Not only do we get reasonably and convincingly written characters in the package, with whom it is extremely easy to sympathize with (or on the contrary), but the whole thing leads us to a ball in an appropriate way. The writers from Bloober Team are not going to rush anywhere, calmly allowing us to soak up the atmosphere pouring out of the screen and, up to a certain point, only multiplying the next questions without answers. However, when the time comes, everything becomes clear and legible, so as to catch us by the throat in the final sequences. The plot of The Mediumit takes up a difficult subject and is by no means one of the most pleasant to receive. So you can be sure that he will stay with you for a while after the credits.

The entire set of mechanisms that make up the gameplay is also subordinated to creating an appropriate, thick atmosphere. Although at first it may seem that we will be dealing with a relatively simple adventure similar to Alone in the Dark , in which our only task will be to travel from one location to another and discover new elements of the plot, over time there are solutions to this so far in the productions of Bloober Team with a candle was to look for.

The widely promoted possibility of simultaneous viewing of events in parallel realities: ours and the more demonic ones, comes to the fore here. Although these types of sequences appear at predetermined moments by the developers, it is not just a cosmetic procedure – the game is designed in such a way that sometimes to move forward, you have to find a passage that does not exist in the real world, or similarly find the interesting one subject. All of this can be put under the common denominator of relatively uncomplicated environmental puzzles, and even if it doesn’t sound particularly fascinating in the long run, there is still a lot going on in gameplay outside of them. 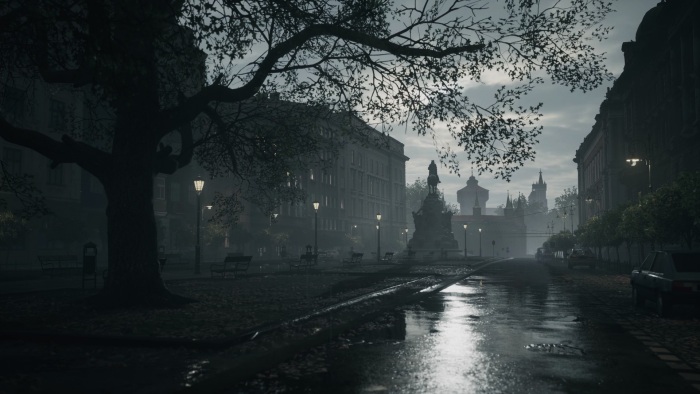 The coexistence of two worlds also determines the next elements of the gameplay: we can listen to the echoes of objects saturated with the energy of tragic events, use mirrors as gates to move between realities, or leave our body for short periods of time to get to inaccessible locations. Standard exploration, on the other hand, is interrupted from time to time with stealth sequences and dramatic escapes – everything here is balanced in such proportions as to diversify the gameplay at moments when another solution begins to bore us a bit.

All stages of decay

Despite the above, it cannot be denied that The Medium is a virtual slow burnthat never gets up to speed and focuses more on creating the atmosphere than constantly attacking our senses with horrors popping out around the corner. In such a concept for the game, the audiovisual setting clearly plays a role, which, for an independent production, has moments when it presents itself almost insanely. The complete lack of interface and predetermined camera angles add to the whole cinematic feel, and this is just the beginning of a feast for the eyes. The next locations we visit have been designed with attention to the smallest details (although posters or brochures straight from the communist era in English are sometimes … rather moderately convincing), the textures are razor-sharp and properly curled with the latest ray tracing technologies, and surroundings inspired by the works of Zdzisław Beksiński,

We can write about the music by Arkadiusz Reikowski and Akira Yamaoka (yes, this is the guy responsible for the Silent Hill soundtrack ) in similar superlatives , which constantly accompanies us during the game, smoothly leading us through successive emotional states. The next point should be written for decent voice acting – it is a pity, however, that with the game so strongly embedded in the Polish realities, it was not possible to implement Polish dubbing, especially considering that such names as Marcin Dorociński or Weronika Rosati were involved in the production. 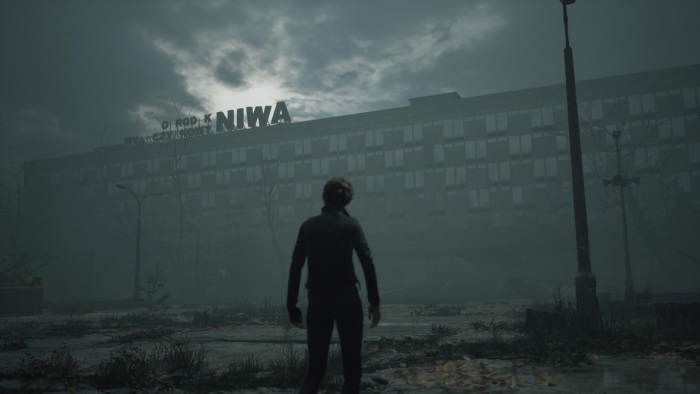 All of this would add up to a technically flawless production, but with all that abundance, The MediumHowever, it can get lost in a few places. They only look good against the background of great places of characters and their limited facial expressions are not a particularly big problem, but the fact that the game is experiencing significant drops in the smoothness of the animation may already be a bit irritating. While the achievements of Krakowians have never been among the best optimized games in the world, just thirteen frames per second on my home Geforce 2080ti with only Full HD resolution (and drivers updated especially for the game), the result is much below expectations. Fortunately, these types of problems appear quite rarely, but are not always related to the most burdensome sequences of double-rendered scenes, which makes it more difficult to explain them with anything else, than simple carelessness and players with weaker equipment can get a headache because of it. In individual locations I also came across bizarrely behaving shadows – but this is a detail, as it occurs even less often than the cuts mentioned above and thus does not significantly affect the immersion.

The end is just the beginning

Looking at the news circulating on the web before the premiere of the latest production of Krakowians from Bloober Team, it was not difficult to come across slogans describing it as “Polish Silent Hill “. After I, together with Marianna, dealt with intangible threats within a few hours, I could not get rid of the question circulating somewhere in the back of my head: do we really have to take away the identity of new productions by constant comparisons to the classics? Someone might say that this is just an attempt to find a point of reference … but in the context of The Mediumit’s hard to agree with that. Sure, we can talk about some similarities or inspirations from the still-living legend of the Japanese series. However, the new horror of the Polish studio is firmly on its feet and has a clear enough idea for itself to give it a chance without the burden of additional expectations. In return, we will get an adventure that may not make us feel better, but with a high probability will force us to reflect on what seems obvious: we are responsible for the greatest atrocities. 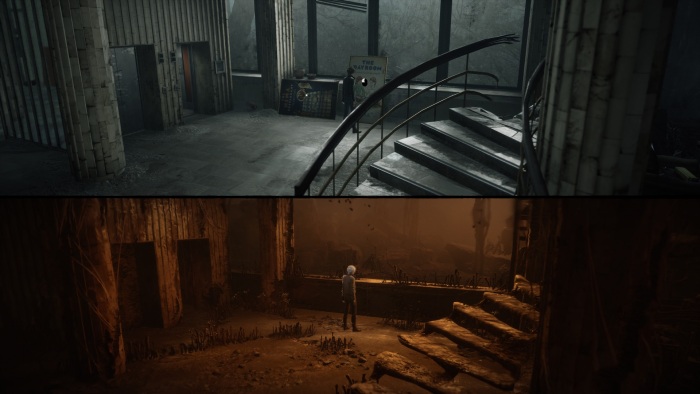 I really wanted The Medium to be as good as it looked like. Although the final result polarized the industry critics, I am glad to stand on the side of those who let themselves be seduced by the Polish terror. The Bloober Team has proven that they can undertake the creation of something completely different from their previous achievements and come out of such a task unscathed. If only next time they improve the technical aspects, we will have another hit. The potential here is undoubtedly huge.

We would like to thank Bloober Team for the copy of the game for review.

Not necessarily scary, but certainly overwhelming, The Medium is proof that Bloober Team will have a lot more to say about the virtual horror.

He is passionate about old school science fiction horror films in the style of "Alien", "Something" or "The Hidden Dimension", rock / metal music and decent (that is, not only single malt) whiskey. He wrote for "Wiedzy i Życie", "Playboy", "PIXEL" or "PSX Extreme", and now you will meet him from time to time in "Nowa Fantastyka" and regularly in "Netfilm".

"Presence 3: At the Devil's Command" without the demons from the previous installments

07.04.2021
« Previous article
The creator of "Fairy Tail" and "Edens Zero" has announced the start of work on a new series. Next article »
Netflix announced the series "Sonic Prime"
Fun facts